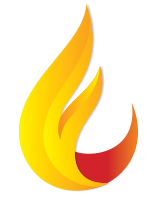 The TC-3000 is packed with unique features, including a large LCD graphical display and keypad. The control panel comes with 3 detection zones, time & date-stamped log, advanced cause-and-effect and extensive I/O.

The TC-3000 detects fires in the same manner as a conventional fire alarm panel, but in addition to triggering an alarm, it can also control the release of an extinguishing agent.

To avoid false discharges, the TC-3000 can utilise coincidence detection or ‘double knock’ requiring activation of a fire detector in 2 separate zones before activating a gas release.

Optional accessories include networked Remote Status Panels, Hold or Abort pushbuttons and Active EOL units – making it one of the most advanced solutions available.

The TC-Extinguishing system detects a fire in the same manner as a fire alarm system, but in addition to sounding alarms, it also controls the release of an extinguishing agent. 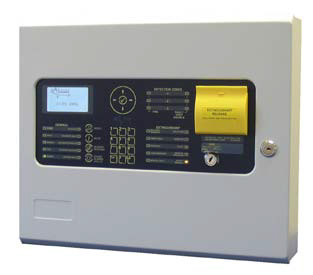 Series 65 incorporates well-proven sensing technologies, together with advances in materials and electronics technology, including an IC based on that used in XP95 analogue addressable detectors.

Having a wide operating voltage of 9-33V, the Series 65 detectors can be integrated into security systems, when used with a relay base.

The Series 65 wide voltage range consists of ionisation, integrating ionisation and optical smoke detectors, 4 grades of heat detector and a range of bases. 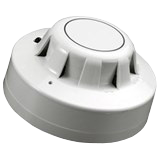 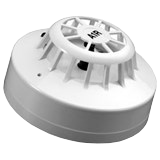 As smoke enters the detector, it causes a reduction of the current flow in the outer chamber and hence an increase in voltage measured at the junction between the two chambers.

The voltage increase is monitored by the electronic circuitry which triggers the detector into the alarm state at a preset threshold. An externally visible red LED lights up when the detector changes to alarm state.

An integrating ionisation detector, suitable for use in areas where transient levels of smoke may be expected, is also available.

Optical smoke detectors incorporate a pulsing LED located in a chamber within the housing of the detector. The chamber is designed to exclude light from any external source. At an angle to the LED is a photo-diode which normally does not register the column of light emitted by the LED. In the event of smoke from a fire entering the chamber, the light pulse from the LED will be scattered and hence registered by the photo-diode.

If the photo-diode “sees” smoke on the two following pulses, the detector changes into the alarm state and the indicator LED lights up. The detector housing is identical to that of the ionisation detector but has an indicator LED which is clear in quiescent state but produces red light in alarm.

The A1R, BR and CR (rate-of-rise) heat detectors operate by using a matched pair of thermistors to sense heat. One thermistor is exposed to the ambient temperature, the other is sealed. In normal conditions the two thermistors register similar temperatures, but, on the development of a fire, the temperature recorded by the exposed thermistor will increase rapidly, resulting in an imbalance, causing the detector to change into the alarm state.

The CS (static response) heat detector has only one thermistor and changes to the alarm state at a preset temperature. Externally, the heat detectors are distinguishable from the smoke detectors by having wide openings to the surrounding atmosphere to allow good movement of air around the external thermistor. 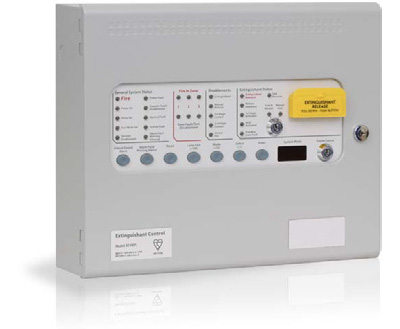 ZP1 fire control panels offer state of the art architecture in configurations that deliver an uncomplicated solution for small to mid-sized conventional applications. They feature an attractive contemporary design that fits with any decor. The gently curved door front offers a distinctive flair. Operator controls are inset in a striking blue lexan.

The ZP1-F4 is a conventional fire alarm control panel. It is supplied in local language with 4 zones that support up to 32 devices per zone, as well as up to 4 supervised relay outputs dedicated to sounder control and fire routing. In addition 2 conventional relay outputs dedicated to common fire and fault conditions, as well as two user configurable inputs for monitoring and control are available.

The panels support 2 types of auxiliary relay boards, one with 4 standard relays, and one with 4 supervised relays. With these boards the panel outputs may be expanded with up to 8 additional outputs. 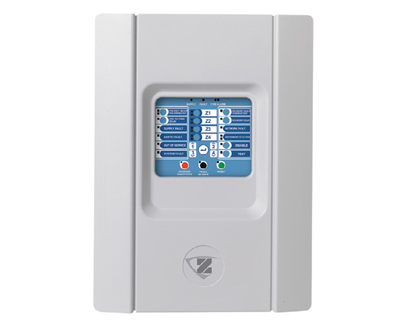 CONTACT FAAB TODAY
Menu
This website uses cookies to improve your experience. If you continue to use this site, we assume you agree with it.
Ok